skip to main | skip to sidebar

Here's a little something that that is fun for a Friday. Some fun we had with photos of the Portsmouth Memorial Bridge is being featured in the local media. Here is the interview we did with Jenn Stevens of the Spolight Magazine at Portsmouth Herald.

By J. L. Stevens
February 10, 2012 1:56 PM
Some folks see the gaping hole where the Memorial Bridge center span stood for 89 years until Feb. 8, and feel a void. For Ron Reilly, of Dover, the bridge deconstruction was a call to duty. Photoshop duty. 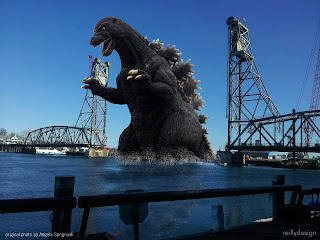 Reilly, a designer and in the architectural field for more than 20 years, and principal of Reilly Design based in Dover, couldn't pass up the chance at creation, and fun. If you haven't already seen his photographs through the frequent sharing on a certain social media platform that rhymes with lacenook, check them out, and enjoy this little Q&A.

Spotlight: Is that Godzilla you've got going between the Memorial Bridge towers?
Reillly: Yes, that's Godzilla.
Spotlight: Which did you do first, Godzilla or the airplane and what specific type of airplane is that?
REILLY: The first one was the plane. The plane is a “modified” Coast Guard C130 - I looked it up. The pontoons are totally fake. Which I figured most people would probably guess. I found that image online somewhere. Some people questioned whether that plane could actually fit so I looked it up. C130's wingspan is 132 feet and the center gap of the bridge is 302 feet. So feasible, yes. Plausible? Not likely. Well, impossible since that plane would never be a float plane, which makes it fun. A former colleague inspired the Godzilla image. She has said the plane didn't look ‘real' but “if it was Godzilla walking up the river it would be more believable.” So I took that as a challenge to humor her. 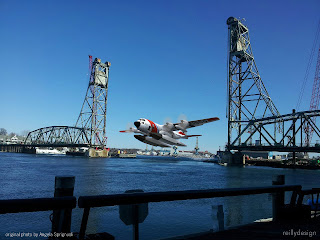 SPOTLIGHT: Where did you get the original photo? How long did it take you to do? Did you use Photoshop? Are you a Photoshop expert?
REILLY: I saw the original picture of the bridge without the center span that my friend Angela Sprignuoli posted to her Facebook wall, and I thought it would be fun to play with the photo. I'm not a Photoshop ‘expert' but use it everyday in my work. These images probably took a total of an hour. Godzilla was more complicated.
SPOTLIGHT: Does this harken back to the artist Bill Paarlberg's work at all (King Kong climbing the North Church?) Are you familiar with his monster series of drawings?

REILLY: I LOVE Bill Paarlberg's work! I've never met him but was familiar with his King Kong Market Square image and the lobster at the Wentworth. He's also done some beautiful architectural renderings. Totally forgot about the Godzilla one. So hopefully he might see this as an homage to that.

SPOTLIGHT: When did you first post them? Can you tell if they've gone viral?
REILLY: I posted them Thursday afternoon. I think they've made the rounds pretty well. I've heard from friends that they're seeing a lot of people sharing it or reposting.

SPOTLIGHT: Why did you do it?
REILLY: I really did it I guess, to lighten the mood for everyone sad about the bridge going away. I too am sad to see it go. I'd even like to do some design concepts to put into that same photo of what I'd like to see built there. Totally for fun.

SPOTLIGHT: Do you think it will help business? Or folks' moods?
REILLY: This was all about making people's day! Just for the fun of it.

Posted by reillydesign at 2:55 PM 2 comments:

reillydesign
Reilly Design is an architectural and environments design collaborator and consulting studio focused on the inventive conception of built environments. We utilize the right blend of architectural and interior design with graphics and technology to convey the branding and positioning of companies. We provide compelling spaces that sell. We also specialize in providing residential design solutions for developers striving to accommodate a chosen demographic as well as solutions for discriminating buyers who desire distinctive homes or vacation getaways that reflect their individual personalities and dreams. reillystudios brings together, through strategic partnerships, the right talent at the right time to fulfill each clients’ needs. We strive to provide the most efficient way possible for large development interests and small or start-up companies to benefit from our experience, and that of our partners, to bring them the exceptional creativity and service one might expect of a much larger studio.